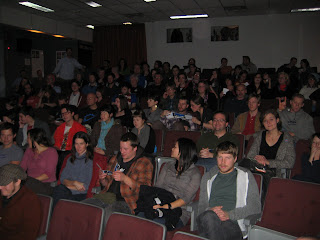 This evening was the One Take Super 8 Event, sold out with overflow at the RPL. William's film turned out really well. It is of the cat walking among his Lego buildings while he reads from Shakespeare. It got a solid response. He was in a great mood all day but really flying at this screening. He was approaching other filmmakers and asking them questions. Top notch. Many of the films tonight were underexposed. I shouldn't talk since mine was sort of one of them, but still there did seem to be a lack of craftsmanship prevelant (mine was dark because of some complicated things I was doing with multiple lenses and parts of it were quite well exposed). I'm hoping the video transfer will lighten it up, but am also considering reshooting it since it was all made on my desk in my office and I'm sure I could do it better if I repeated it. I might even try to shoot it digitally using the new pentax/tamron camera mount I bought with which I could mount my true macro Tamron lens onto a Pentax digital SLR such as Margaret's mother has.
Posted by Gerald Saul at 11:48 PM

Email ThisBlogThis!Share to TwitterShare to FacebookShare to Pinterest
Labels: One Take Super-8 Event