Get your head examined 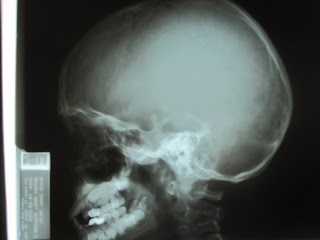 William broke the number one rule of our household: "Don't fall on your head". Three x-rays, four stitches, a missed performance of William's Globe Theatre acting class later he is going to be completely fine.
I eventually got to the fourth year film screening. It was packed with people up and down the stairways at the Imax theatre. Even at midnight when it was all over, there were at least 100 seats filled. The projection was dim but otherwise it was a solid show.
Posted by Gerald Saul at 11:55 PM