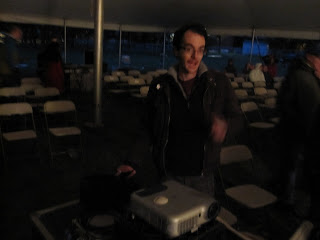 Tonight was the Filmpool's "Screening Under the Stars", as part of the Cathedral Village Arts Festival. They claim it is the 19th but it's actually the 18th. One year the festival organizers simply never made contact with the Filmpool and asked SMPIA to organize the screening. By the time the shit hit the fan, there was already someone committed to selecting and hosting the screening of projects from the industry to present. It was a cold night like this one and I missed it. We all went tonight though, weathering the cold and rain. The screening for the past couple of years have been on video instead of film and have been shorter. While a bit less romantic, this is certainly more practical for the event and venue. They showed the Film Frenzy film I worked on last year; it was nice to see it again.

sweet. i was hoping i'd turn out looking like this.