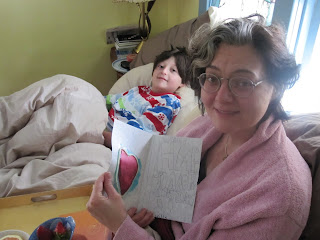 Busy mother's day today. William and I prepared some coffee and fruit for Margaret. Later in the am, Margaret's parents and brother came to our house where I made waffles and bacon and so on. Later on I took my mom shopping for a new office chair. We started at Staples where the selection was good, although the service was terrible. We made some observations then she insisted we go to Costco where we bought a chair from the three choices they had. It is a good one. I assembled it and the final two bolts were not long enough (made in China) so I went to the hardware store and found replacements. Everyone happy.
Posted by Gerald Saul at 9:06 PM