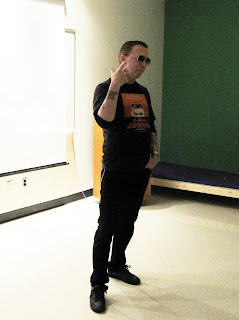 Today Bruce LaBruce came to my class and spoke with my students for about 2 hours. It was a very good session. He showed clips from his various films since the early 80s, creating connections between the first collage-style experimental films and the 1/2 million dollar "Otto" zombie film from last year. He showed some scenes from "LA Zombie", his newest films which will be screened this Saturday at the Artisan on 13th Avenue. It's funny the sort of direction your work takes when you are produced by a German pornography studio. He uses sex, again ever since his earliest films, as a political device as well as a type of affordable spectacle. With the exception of "Otto", his budgets are generally $70k or so; "high" budget porn films. He creates two versions of each, the hard and the soft. Each of his films shows at around 150 film festivals making them the prestige films of his studio (I suggested he is making the Caligula of the 21 century). LA Zombie was banned from Australia this summer by their censor board. I can't wait to see the rest of it.
Posted by Gerald Saul at 10:20 PM