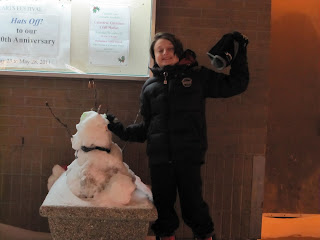 It snowed a lot today. I worked with David over at his house for the first time. The afternoon was mostly grading but for one meeting at the office - a bit of a trial in the blizzard. This evening I had to force William to go to his acting class but mid way through it he started loving it again. He has a new role of acting the director and being the narrator. I hoped he would reconnect. We'd spent an hour while preparing supper writing a story he'd like to make into a movie so I know he's having a particularly imaginative week. Here he is beside the icy snowman he and Margaret made a few days ago on 13th Avenue. It has required repeated restoration but is now so coated with ice that it is nearly impenetrable.
Posted by Gerald Saul at 8:45 PM