Saw Sherlock Holmes today; the later afternoon show. Loved it. The two new Holmes series' are difficult to reconcile into my thoughts on the Holmes/Watson relationship I discussed at the Doyle conference a couple of years ago. The Guy Ritchie version reflects an increased complexity of their relationship, based as much in respect as it is in friendship. The BBC television series "Sherlock" is far more troubling. If we, the viewers, are to see that Holmes through Watson's eyes, we seem to take a role of the masochist, an even less palatable position than that of the Rathbone/Bruce idiot. Love that one too, regardless, and can't wait for it's return in the new year. 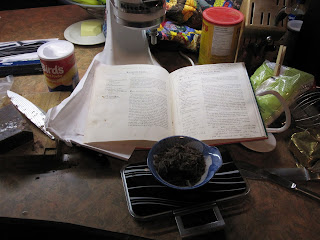 I made my awesome Nanimo bars this evening, based on my mom's secret recipe (which you can see scribbled into the margins beside the inferior recipe.
Posted by Gerald Saul at 11:22 PM