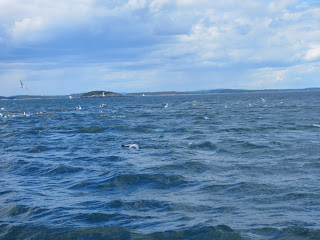 William began a weekly workshop on game design with Allan Dotson today. His friend Griffin is also in it. I had a Filmpool meeting. Didn't get much else done, there was a lot of noise all day and I didn't get much reading done and my film didn't go on line until after midnight. One delay was that I misplaced my whale footage from the Maritines. I was going to replace it with lobster footage so modified the script and title, but then found the whale footage and changed it all back.
Posted by Gerald Saul at 11:00 PM