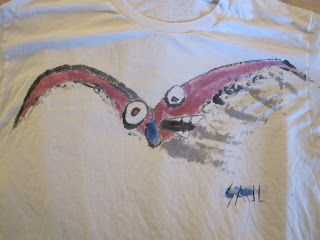 I was very disappointed in the digital 3D system they used on "Abraham Lincoln, Vampire Hunter".  We all went in the late afternoon show with the anticipation that these higher end glasses would be superior to the other disposable ones, but far to the contrary, the smaller images and especially the distant images were often seemingly double and the smoke (almost ever present) felt muddy and confusing. I wish I'd seen it in 2D, although I'm unlikely to go the effort to see it again (on the same subject matter, "The Amazing Screw On Head" was far more inventive and entertaining.
Pictured above, one of the many t-shirts I painted in the late 80s or early 90s. They are taking up space that I want for other junk so I'm disposing of them.
Posted by Gerald Saul at 11:35 PM

Dude! Sell or donate those classic tees.
Unless I read that wrong. Is it just a box of t-shirts that haven't been worn? Or have they been worn since the 80s/90s?
I thought you did a run of shirts at one point...

I made dozens of shirts back then and wore them often. Many were threadbare so were only stored because they were original art. I photographed them all and let Atlas shrug.