catching up on blogging 1 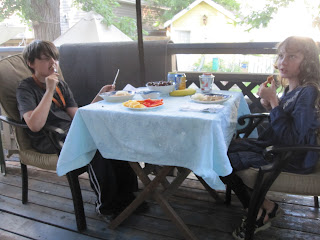 I've fallen behind on blogging by six days, which is a really long time for someone with as poor a memory as mine. My camera indicates that this day William got together with his friend Teagan for a bike ride which was really an excuse to go to the store and spend $15 on candy. I remember earning $20 when I was about 12  years old and going to the Golden Mile shopping mall and spending it all. I bought an 8 track tape which did not contain what I  had expected, and I bought a Planet of the Apes poster which I had on my wall for many years (but lost somewhere along the way).
Posted by Gerald Saul at 11:00 PM