William has a good day 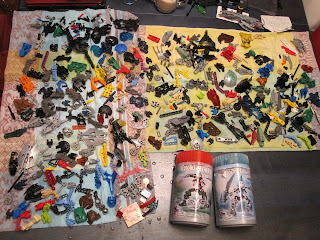 After numerous phone calls to everywhere we thought it might be, we were fortunate to locate William's lost camera at the Shakespeare on the Saskatchewan grounds (they didn't have it on Sunday but it was located Monday). Mike kindly picked it up for us. Yesterday I bought a sizable bin of used Bionicles for William (circa 2002-2003) and surprised him with them this morning (along with the news that his camera had turned up). He also started his afternoon camp on gaming with Alan Dotson. This evening William and I watched the final episodes of "Reaper" on Netflix.
Posted by Gerald Saul at 10:47 PM