colour film by the book and improv with the boy 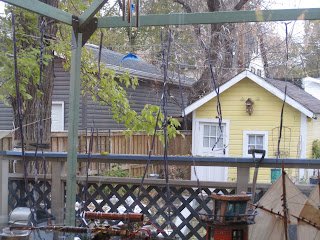 Couple of meetings today but managed to get into the darkroom and develop some colour film. I'm running out of C41 chemistry but found one last small kit of it at Don's Photo (they can't get any more after this, so will need to figure out a different deal). There is limited space to dry film at the University during the session (the studio, for example, is being used so I can't hang things there), so I just threw it in a bucket with a lid and brought it home to dry on the deck. It was rainy today but very very windy, so the film generally dried faster than it got re-wet (final drying before winding it up was on top of the pumpkins in the tv room). 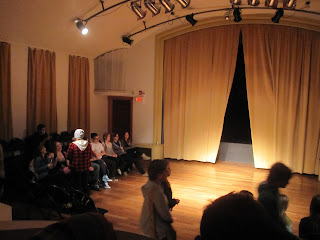 This evening William really wanted to go to the Combat Improv at the Artesian on 13th. It started off a bit slow but the second half was quite funny. William liked it all. Sat beside Jason Cawood for the first half and had a great chat. Jasonwas feeling old in this crowd. I decided that since it was William's choice to come, that I could average our ages to fit in. Eric Hill was running the lights and was stationed just over our heads. Even so, it was difficult to talk with him at any length.