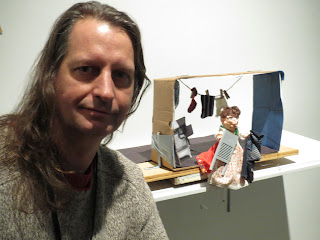 Tonight was the sold out show premiering 19 Saskatchewan short puppet films as part of the International Puppet Underground Film Festival which came out of Chrystene Ells' residency and workshops over the past year. I screened "It's About Time" which was received well. The Dunlop Art Gallery has dozens of the puppets and sets on display today and tomorrow. Many people were saying the gallery exhibition should stay up longer, it is really interesting. However, it was arranged sight-unseen a year ago to go up between regular shows so there is no room for altering that plan now. By lucky chance, I ended up sitting beside Amalie Atkins, whom I had not met face to face before. It was great meeting her at last.