Last Snowman of the year? 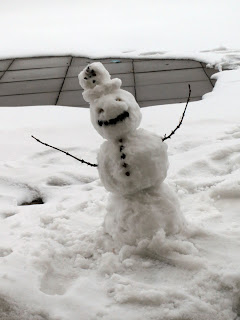 It seems like this SHOULD be the last snowman of the year, but I doubt it will be. I tried to shovel for a while and there was just too much of it and I gave up after fifteen minutes and no appreciable progress.
Internet was down for a while today. William played with Bionicles instead, which I think he found pleasing as he's decided to reread all of the old, rather short, Bionicle "novels". He's treating each as a chapter and reading one per day.
Posted by Gerald Saul at 5:58 PM