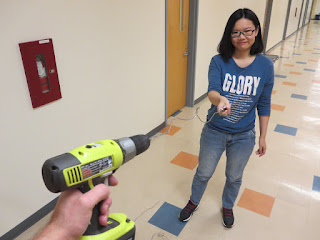 Event one: after forgetting twice, I finally remembered to bring my drill and 16 gage wire (from fencing) to my meeting with An (last meeting of the year) to twist pieces of it for use inside animation puppets. We maintained control and no one lost an eye. 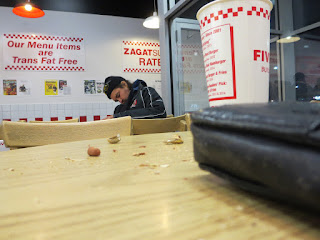 Event two: after some Christmas shopping with William, we went out to eat at Five Guys in the south end. We were waiting for our food for a long time. #15 was called but we were #15. Soon we saw them making Cajun fries so we figured we were next but then they called #19. When I allerted them to this, the assistent manager realized that our meal was either missed (unlikely) or taken by the #15 people so they began making us a fresh set of burgers. In the meantime, the table beside us became occupied by two guys, one of whom seemed to be sleeping while the older guy searched the sleeping guy's pockets. I leaned over and commented on how tired he must be and asked if he was okay. The older guy said his buddy was diabetic and just needed some food but they don't have any money. I gave the guy $10, more than enough for a burger, to get his friend some food. A few minutes later he was rattling a bag in front of his nose but the sleeper still didn't wake. Eventually the older guy went outside, presumably for a smoke, but after 5 minutes I suspected (rightfully) that he wasn't coming back. I then tried to wake this guy up to get him to eat (the smell of booze was now obvious) and the assistant manager also came to help. As she began phoning her manager for advice, I eventually (after literally 10 minutes of trying) got him to wake up. I suggested that he eat. The food bag now open, I found it to contain one small order of fries (cost: under $4). The sleeper said he wanted Chinese food but I pointed out they were in a burger joint. By the time we left, he was finished the small fries and was onto the fries from our order that I left him (the assistant manager had given us lots of extras due to the prior error).
Posted by Gerald Saul at 7:16 PM