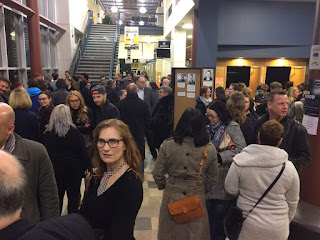 We went to the opening night of Joey Tremblay's "Bad Blood" at the University Theatre. There was a good crowd. I thought I could get some photos of the cast at the reception but didn't realize it was a closed party for Curtain Razors only, so I'll need to save my conversation for another day. I'd hoped to tell Joey how personally moved I was by the play, something that basically never happens to me with live performance. I'd not realized going into it that it would be about his hospital experiences that resembled so many of my own. Throughout the play I was taken back to the mid-80s and my time in the General Hospital struggling with pleurisy and simultaneous undefinable liver ailments that the doctors gave new diagnosis to every day. I feel I so so much luckier that Joey because I never had his devil-doctor. Instead, I landed many doctors who felt drugs were likely the best answer and my being-hit-by-a-bus-painful ailments went away eventually from drugs so I never had to face the surgical solutions (which I would have taken just as Joey did, the pain and exhaustion left little alternative). I don't think the play really communicated how much the pain played into the decisions, but I remember. Wow. It took me a few hours to come down from this performance and be myself again.
Posted by Gerald Saul at 11:47 PM