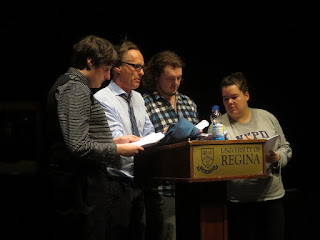 Stephen Surjik was a Filmpool member before I joined. He made a couple of films including the YFF award winning "Razor in the Wind" that I've programmed a number of times and seen at least a dozen times. He moved to Toronto just before I joined in 1984. The students invited him back this weekend to be a guest of the Living Skies Film Festival. He was scheduled to talk before the films at 7:00 tonight so I took my evening animation class to see him, figuring we'd cut out at 7:30, miss the student films, and return to my scheduled material. What happened instead was that he conducted a two and a half hour workshop and Q&A session, breaking down four scenes from an episode of Daredevil, doing cold readings with three volunteers, walking us through all his storyboards and floor plans, then playing the scene. It was a tremendously generous sharing of his wealth of experience. William played Matt Murdock/Daredevil for two scenes and young Wilson Fisk in two other scenes.
Posted by Gerald Saul at 10:33 PM