William and I went to "Strings", a 2004 marionette feature film at the RPL this evening. Saw Mooky and Sara there, fantastic to see they have returned from their world travels. The film was pretty solid, although the ending left me wondering about some of the core ethical themes. The main character has realized that his nation are really the bad guys and have conquered the city they have been living in for generations. What does he do with that knowledge at the end, now that he has decided that peace is the best solution? Will he surrender his city to a nomadic people they have grown up hating? I doubt it. Will they invite them in? I suppose so. Will they give them property? Maybe. Will they give them good property? Many many questions are left unanswered. 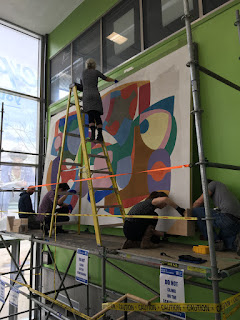 This morning Margaret helped move the big Douglas Morton painting from the entrance way of the Regina Public Library for cleaning for the second time ever. The first time was only two years ago, after it hung there for four decades. This time is because someone set a fire in the book return a few months ago and smoke damaged the area. They moved it differently this time, opening the huge windows and taking it out in one piece (some cutting needed to happen to accomplish this).
Posted by Gerald Saul at 10:24 PM