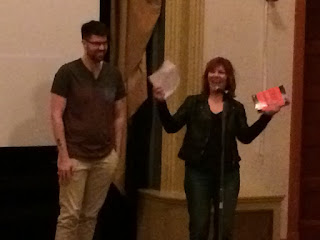 The fourth year film students showed their work at the Artesian last night to a full house. I saw Philippe, back from his world travels during his sabbatical (Tasmania sounds very cool) and I got a few minutes to catch up with Jon Tewksbury. Margaret and William didn't make it out this year as they were caught up with family. Christine presented the Oser prize. The prize was divided between Mark Budd (cousin of Adam, who was in our program 10 years back) and Austin Nygaard (pictured here with Christine sans his signature beard). Austin is the surprise as he is actually a Film 200 student taking a fourth year studies course so would not be expected to outperform the third and fourth years. Big congratulations to everyone, especially Austin.
Posted by Gerald Saul at 2:15 PM