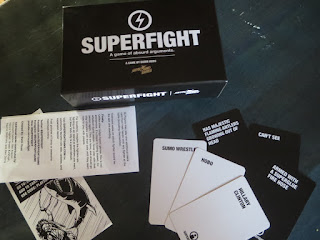 Terry, Xander and Paul came over for a bit of a game night. We played a bit of Superfight which William had been watching play-throughs of online which led him to buy it for me for my birthday last week. It's a pretty great game with only the loosest of rules. Basically you pick a few cards to create a character (example Clown card combined with "swinging a shark from a chain" card) and a second player does the same (example: Hitler card combined with "turns invisible when singing show tunes" card) and the two player argue about who would win in a fight between them, It is basically an update of grade 2 playground talk, until eventually they stop and the other people at the table vote about who wins. I guess it isn't for everyone, being so subjective. One fight could last two minutes while another could last an hour, which is okay if it remains entertaining the whole time. What is a game for anyway. Bang is more structured and is great for a larger group (I think we have an expansion to allow up to 8 people to play). I had a rough start to the whole thing, trying to ingest enough drugs to cut the massive fever I went home from work with. I had three naps during the day and still fest completely defeated.