Time with Tom around Regina 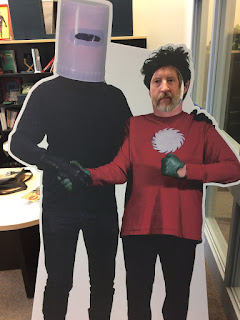 June showed Tom around campus. Later I dropped them off at the Black Arrow (or something like that) which is a private club beside Milu's on Victoria. This club was introduced to them the day before by someone else playing pinball at Rebellion. The Black Arrow has three machines in fantastic running order including a Sopranos machine in "adult" mode (much swearing emanates). In the evening Allan came over and we all mostly drank and told stories.
Posted by Gerald Saul at 9:23 PM