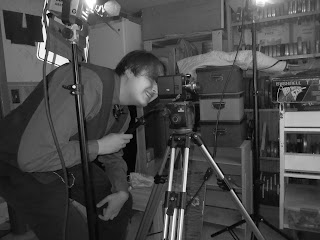 William had an extremely ambitious super-8 film idea that was possible but would take at least 100 hours to create. With his exams this week and the deadline for the films on Monday, I helped him minimize the film and use a lot of shortcuts that will give the film some style and campy fun. I think he's happy with where it went.
Posted by Gerald Saul at 10:02 AM