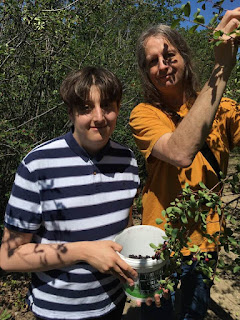 We left Saskatoon by noon, stopping at a self pick saskatoon berry farm before heading back. The berries were smaller and less abundant than the place that used to be near Regina and it took the three of us a half hour to fill one bucket. Good flavour though. In Regina our first stop was a sale where a few vendors, including Lady Arcane's taxidermy (mostly rabbit heads on plaques), religious antiques of mainly ironic qualities, and clothing and accessories by Karlie Jessup (from whom we bought a few things). This was all hosted in front of the Broom Closet witchcraft supply store on Dewdney. Later we went to the newly renovated Caroway Grill with Margaret's family. Although exhausted by this point, we escaped the heat by going to Ant Man and the Wasp. 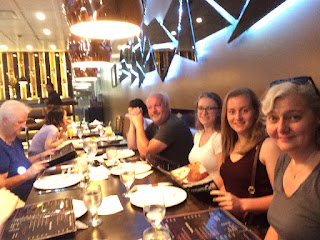