Managed to get William out of bed and fed before noon so that we could meet up with Margaret at 12 to shop at Colin O'Brien's for clothes at their annual big sale. I don't think we walked away with as many items as last year, although we did spend as much. He has some new shirts and one pair of pants and I got some orange pants. There was a jacket which would have launched his game show host career but it didn't fit. 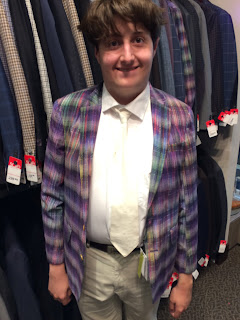 William and I got caught in a huge rainstorm while trying to shoot my Swampfest film this afternoon. I got about 80% of it done. My knee has been killing me but I thought it was better as we headed down the street to see a Fringe play. Fortunately I had a couple of seats free beside me so at the midway point when it was aching, I could put it up. Ice worked well after we went home so we ate quickly and headed to a second play, "Two Chairs and a Piece of Wood" by director Cameron Chomyn and performers Cole Nicolson and Andrew Parry. We first knew Cameron and Andrew and "Cam and Andy" or more often as "Biggy and Smalls" thought improv. They are brilliant and this play was certainly a high point in the day. It is a hilarious critique of the heartfelt tell-all performances. Highly recommended. Two more shows this weekend. On the way home we tried to go to one Secret Garden on the night tour but it was apparently a secret from the owners who had not planned on it being a night garden. We did catch one garden before dark though. More tomorrow probably. 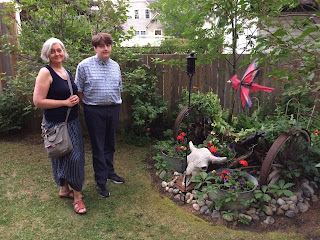