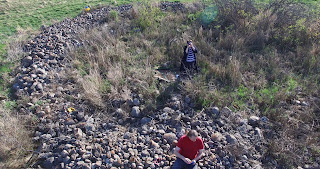 Put the finishing touches on a film I've been thinking about for twenty years and planning for the past two years.I It is the first (?) short sequel to "Life is Like Lint", a feature I took years to complete and screened very few times (premiered in 1999). The new film, "Overview (a life is like lint story)" is simultaneously my most meaningful and my most trivial film I've made in a while. If you are one of the few people to have seen "Lint", it might make some sense. If not, it makes less sense but is at least short.
Posted by Gerald Saul at 11:59 AM