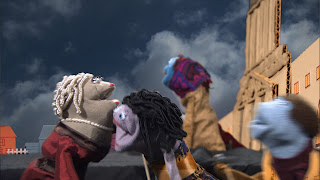 About 10 years ago I did a course with a great bunch of students which was entirely focused on one project, an episodic puppet tv series called "Sock-Vile". Everyone worked really hard and the results were magnificent, expect the follow through. We managed to work together to write 15 episodes of the series, each about 10 pages. The class worked in teams, some creating puppets, some refining the scripts, some building props, some casting and pre-recording voices, and everyone on set shooting. The script was recorded in a sound studio and edited as audio and then lip sunk on set with puppets against a green screen. These short cuts allowed us to shoot the 150 pages of script in 3 days. I put together an assembly with no green screen replacement by the end of the 13 week term.
Then things slowed down.
Some students continued working on backgrounds.
I worked on and off with Erik Sirke to shoot background and edit, but the project was just too big and admittedly a bit too inconsistent. About 4 years ago I sat down with Erik Sirke and Geremy Lague and we re-considered the entire project. Instead of 15 chapters with numerous threads tying them together, we resorted it so that it would be just 3 longer chapters, each focusing on particular season-long stories. I began editing but time was not my friend. I got distracted and then let it slide. It is a very complicated project and cannot be picked up and put down without repercussions. Progress stopped again.
Three weeks ago I began work in earnest. Today I got the first pass of effects for the first of the three episodes (about 30 minutes). I still need to render it and certainly there will be fixes needed, but the quarantine has given me some time at home that this project needed.
Posted by Gerald Saul at 8:41 PM