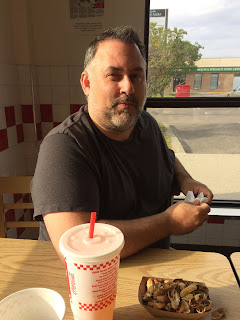 I just got word that my friend Rob Edin passed away two days ago. He's been in Calgary for years now but I've known him 25 years and we were gaming online until a few months ago. We were at his wedding when William was little and his twins' first birthday bash some time later. We've exchanged a few emails recently and he was worried about his health, but he also seemed confident that his doctors would find the right balance of stuff to fix him up. I don't what happened but his sister says it looks like a heart attack. He's at least six or seven years younger than me and loved peanuts but couldn't eat them at home so indulged at Five Guys when he visited Regina. Photo above is from a Five Guys in Regina in September 2018. Rob loved history and brought a wealth of knowledge and passion to his games. He was also a really caring person. He always talked about his kids and put them first. Rob visited me when I was it the hospital in Calgary 19 years ago and this meant a lot to me. I'll really miss him.
Posted by Gerald Saul at 9:10 PM