I wrote about Tyler Banadyga's film "Toast" from the One Take Super-8 Event in my experimental film review blog. Later in the morning, Alex Rogolski came by the house and Margaret, he, and I spoke for a half hour on tape about the super-8 event. Margaret is moving on with her thoughts on recording and will be more actively collecting interviews with artists. It was pretty relaxed, I think talking in the kitchen might be a better way to go sometimes than going to a studio.
CUPE is on strike so the facilities for our department are shut down. I slipped into the darkroom to do an experiment while it was not in use. Following instructions I found on line from Roger Bunting, I successfully developed a piece of movie film using Maxwell House instant coffee and washing soda. Coincidentally, I received the book "The Chemistry of Photography" by Bunting today. I've just read the first page, the instructions I used were just from the website. I used regular film fix rather than his alternative, sea water, due to my current shortage of sea water and to wanting to test one method at a time. 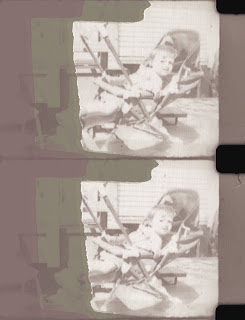 The shadow on the left side of this sample frame is actually the result of the scanner and my lack of necessary holders for scanning 16mm film frames. It looks better than this. I developed it as a negative. I followed the 25 minute suggestion but I think I over developed by a few minutes, I might be able to do this hi-con film stock in about 15 minutes.
Posted by Gerald Saul at 10:09 AM