It is family day today as well as the first day of reading week, so I wasn't at work. I've slept seven hours a night the past two nights, perhaps even more. That's the most sleep I've had in a row for months but I'm still wrecked. I just want to watch tv but can't really even do that because the moment I do, William is on my lap wanting to watch Penguins of Madagascar and he's already watched more tv than Margaret wants him to, so we are basically both cut off. I'm going to try to watch a bit of something on the portable with earphones under the radar. I did manage to watch "Waiting for Guffman", Christopher Guest's first film over the past couple days and found it disappointing. He doesn't take things as far as his later films like "Best in Show" or "Mighty Wind". 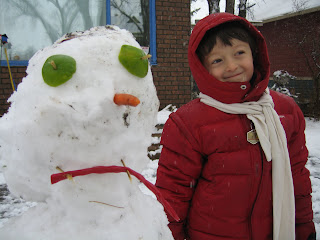 Old photos are nice to look at though. It always seems like an extravagance to leaf through old images. This one is from over four years ago. That was a great jacket on William and I think that I feel like the snowman looks.
Posted by Gerald Saul at 8:51 PM