What is happening not at work 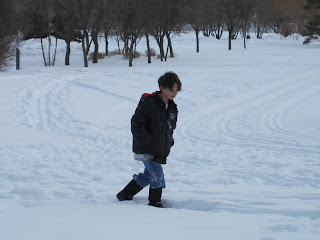 I've been working on a series of videos that respond to some specific poems for a European festival. I ran across the call for entries in a some random searches for experimental film last week. They are short and I've got some ideas so each of them shouldn't take long to make. I've made two so far (over past three days) and hope to make two more. I had the text read in French by one of my ex-students from Quebec to ensure a distinctive Canadian sound. He voice sounds great when recorded with the good dialogue microphone in the super-quiet recording studio. When I listen, I find myself whisked away into some inexplicable Godard film opening. The problem will certainly be in making sure that I get the right materials to them in time. Not only do I have only 10 days from today to get the discs over seas, but the requirement is specifically "PAL DVD". I shot raw footage for them with my still camera set to HD PAL mode (see still from film above), and have been editing in PAL. I'm certain that the DVD authoring software will let me work in PAL. However, I will have no idea if the disc I make will actually run when it gets there! I guess I'll create some quicktime back-ups for them on another disc.
William had the day off so he and Margaret ran errands. They cashed in the recycling for $13.50 and bought $3000 worth of furniture and appliances (a new juicer, a new dresser for William, and a wardrobe for our room: appliances to be delivered next week).
Posted by Gerald Saul at 10:55 PM