walk on the wild side 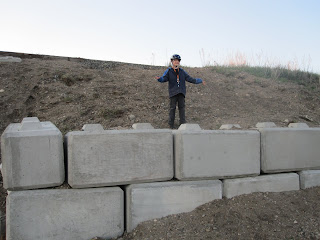 Last night I walked (and sometimes jogged or ran) with William as he showed me how far he can go on the bike path. From the Balkwill Centre near our house he went west to the baseball diamond, under Pasqua, under the Lewvan, north two blocks and around the bend to the Italian Club, past the dog park, under the 13th avenue tunnel, under the rail bridge with the giant cement Lego blocks, around the golf course and to the edge of the RCMP barracks. I made him turn back at that point, even though he says he went further the previous time. We had to get back before dark and, as I said, I was walking. I considered just cutting over to Chrystene's house since it was in sight of where we were and get her to drive us home but I wasn't completely exhausted yet. That would come soon enough as we raced against the fading light all the way home. I still ache.
Posted by Gerald Saul at 11:34 PM

I woulda done it! Or at least loaned you a bike...I was out there around the same time last night on my bike with the dogs, strange we didn't run into each other!