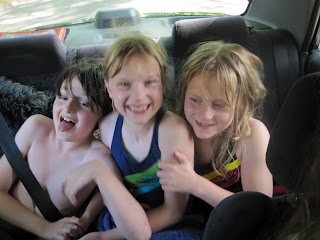 Margaret's brother George and his two daughters arrived in town today. William spent his entire day with them, some time at our house, some time at the museum, then some shopping, then some water parking where we were joined by Mike and Paul, then some ice cream time where we met a performer from the Fringe Festival and also bumped into Steve Cameron, then home for some Monty Python time, raced to the Dunlop minutes before closing so the girls could watch the Ipod video interview I shot of William interviewing Geoffry Farmer, then some supper at Gertrud's, then some game time. They had to be up very early this morning to catch their flight so we had to leave them after 12 hours of activity.
Posted by Gerald Saul at 10:34 PM