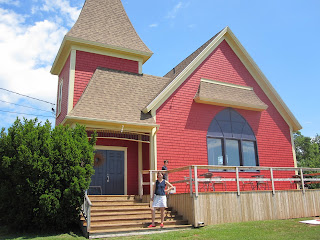 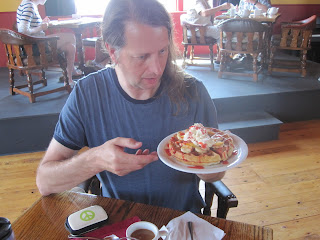 On Eddy's wife's recommendation, we found this church which is a dentist's office in the back and a cafe run by the dentist's wife in the front. They had a jazz concert last night that we were too tired to attend (plus the fact that it was a 45 minute drive from our Bed and Breakfast). We had "Weekend Waffles". I was sold on the fact that they were called "Weekend Waffles" in the menu and I figured out that today was Saturday. Today it was run by the two sons, home for the summer. Their sister, Kate Bevan-Baker, is a singer on tour with a jazz/swing band in China so we bought her two cds to listen to in the van. 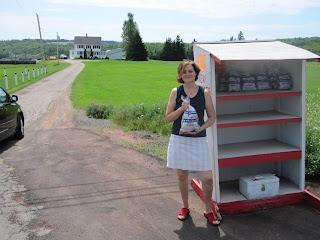 There was a road side stand selling PEI potatoes on the honor system. Deposit $3 and take a bag. We went to a red sand beach near the cafe on their instructions, parked and played. There were loads of live crabs and hermit crabs and snails in the water as the tide went out. 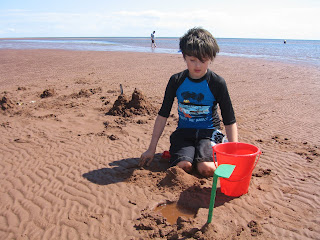 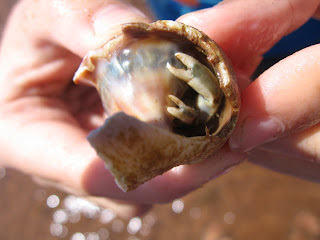 We left the beach and discovered that we were on a non-public beach and that there was one a couple minutes away that had change rooms and play structures. We did well where we were. The nearby town of Victoria By The Sea had a B+B, Fringe Festival plays from Montreal, and had just completed a literary festival centered around a very nice book store. They also have a hand made chocolate shop were we coffeed, bought some PEI honey, and recharged for the drive back to St. John. This time Margaret drove the bride. They charge you a toll of $42 to exit PEI, it is free to enter. 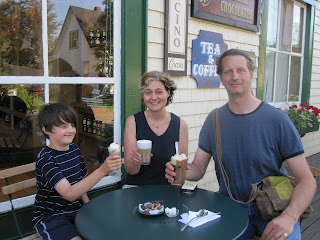 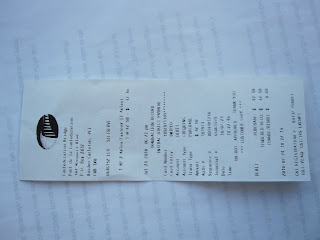