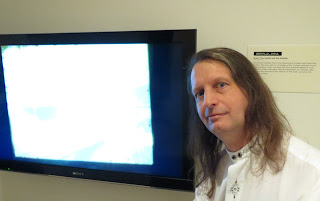 The opening of the faculty exhibition at the MacKenzie was well attended this evening. We arrived a bit late and only caught the tail end of the New Dance Horizons performance. University president Timmons said a few words and also came up to me afterwards and we had a nice chat. She even introduced herself to William. My piece drew positive comments. I'm happy with it. While it is presented as a loop on a video screen, I felt that the usual short loops, such as the nature of most of my previous loops as well as the works I was doing on my sabbatical, were not the right approach for this event. So even though I never want to watch films in galleries for more than ten minutes, this one is over twenty.  I wanted a project which had a greater range of complexity and that would be very difficult to digest in this surrounding. Why? Perhaps I simply didn't want to be easily understood and therefore, just as easily dismissed.
Posted by Gerald Saul at 11:18 PM