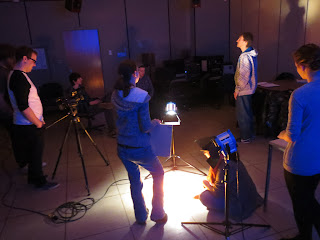 We worked a bit with mirrors, reflections, and shadows in class today. Afterwards I ran into Mike Rollo who had a preview disc of some beautifully lyrical super-8 work by Paul Clipson. Discussing super-8 cameras, I bemoaned my lost Canon super-8 but suggested that a recent find in my basement gave me hope that I still might have my camera in my boxes of junk. 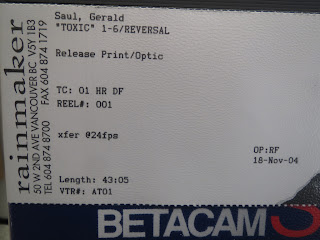 A few weeks ago I opened a sealed box of 16mm films from Rainmaker. They were my six "Toxic" films, each at 5 minutes, plus my long time missing "Green Man" film which I'd not been able to find in years and figured I'd left in an editing room somewhere. However, it appears that I sent it for transfer and forgot. Above is the label of the tape from Rainmaker from 2004 with running time of 43 minutes. As "Toxic" is only about 30-31 minutes, it appears I have a new project to complete! "The Green Man" was a series I did for "Utopia Cafe" in 1996. I made about 6-8 shorts but only two were completed and used in the program. My contracts with "Utopia Cafe" all stipulate that copyright of my material returns to me after three years. My regret now is that these are in standard definition video. I guess I can look at them and see if it would be worth the $150 to have an HD transfer done.
Posted by Gerald Saul at 5:43 PM