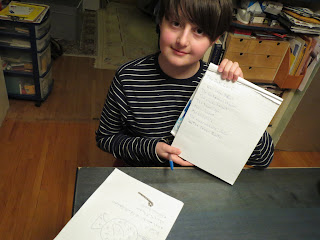 I think William had a pretty good day, full of conversations. He went to the track with school, something he'd not been looking forward to, but I gave me my old mp3 player full of Beethoven so he was okay. He reported that afterwards he sat down with his classmates and had a conversation (his favorite activity). This evening Paul came over for supper and afterwards we watched "Unicorn City" on Netflix. This got William all excited about running a role playing game and wanted to start planning it. I gave him some ideas about a good villain  I then told him to write it down, reminding him that I always forget my ideas and will not repeat anything I just told him. He frantically began putting it all down on paper.
Curiosity about "Unicorn City": it is a fairly humorous indie film about dungeons and dragons players (under other names) which lost a lot of its steam about half way through. However, what I was interested in was that the wide screen presentation seemed to frequently leave out important details above or below the frame as if it was shot in 1.33 or 1.66 and cropped to make it seem more Hollywood. I wonder if this is true?
Posted by Gerald Saul at 11:09 PM