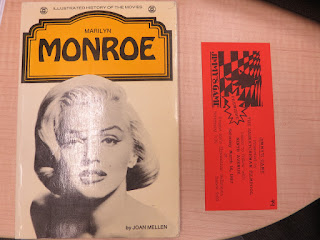 I was going through some books in my office and inside a rather uninteresting book on Marilyn Monroe, I found a ticket from the premiere screening of the Saskatchewan Filmpool produced, half hour drama "Jimmy's Game" from March 14, 1987. Even more curious is that on the flip side of the ticket is a hand written note from Pukka T. (aka Shane Kurenoff) that he obviously put some though into. It reads; "Watch this if: - you like psychic tv, liked eraserhead, like the beatles (or hate them. the beatles don't matter much.), you dislike led zepplin, you think you can handle it, you want to feel good again, you want" Hmmm. 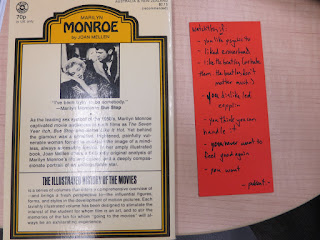 What kind of a game was Jimmy's Game? I completely forget…

I think there was a drug thing going on. I was an undercover cop in one shot. I have a poloroid continuity shot from that day which contains my only colour image of my green Datsun I drove back than. I can still hear the title song the woman sings in the bar "Jimmy's Game! Jimmy's Game".

Ha.
You flatter me - I am sure at this time I was struggling to put thought into things and mostly finding my cup empty. I was inspired by many things and people - including all you Depressionists - to make things and to become smarter. So thanks!

I also love things like this - where I have no memory of doing these things - or even why I would write that on the back of that ticket - in fact I don't really remember Jimmy's Game either.