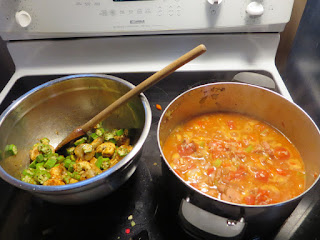 It's been at least 15 years since I made a jambalaya. Back before surgery and before William, we used to make stuff like this all the time. Now that William is into it, we started hunting for okra. It used to be difficult but not impossible to find it frozen but now none of the main stores stock it anymore. We found some at Tony's but then yesterday I found it fresh at Superstore. The only real substitute was the sausage. We went to the Ukrainian Co-op and tried a few and picked out one. I stayed with the smoked pork kubasa which the internet said was an acceptable replacement. William slaved over the stove, stirring and so forth. The recipe turned out quite well in my opinion. William had seconds (perhaps even thirds) so it was certainly worth repeating.
Posted by Gerald Saul at 11:08 PM