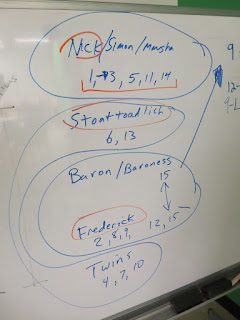 Geremy, Erik and I (with a bit of commentary from William) made some significant editorial decisions about the perpetually uncompleted "Sockvile" puppet program I made with a group of 15 students in a course five years ago. I've been feeling that the 15 episode structure was just not working. It was uneven with some episodes rushed, others crammed,and storylines getting lost. I'd decided to try to tighten it into one long film but this weekend we started realizing that some of the subplots, specifically some of the better subplots, were not relevant to the primary plot and should be removed if we were really intent on making a feature. Today we decided to create three stories which intercept each other, taking place at the same time. I'm confident this will be more satisfying. Now the real work begins (again).
After burgers at Five Guys, we went to see Geremy's house. He basement will mess with you (observe):