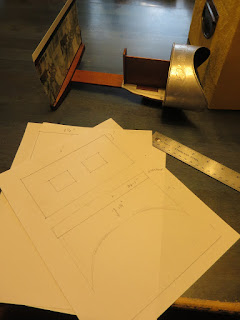 I drew plans and then put together a cardboard mock up of the stereoscopic viewers I want to build. They don't quite work yet, probably due to the lenses being mounted straight instead of at an angle. I didn't know this would be such an issue until I tried them out and couldn't get the images to align. I brought it to Brian Gladwell and he suggested some refinements in building them and I think the combination of his observations and my needs will lead to a fairly easily built model next week.
Posted by Gerald Saul at 8:45 PM