In Film 200, we started shooting with the Bolex. I believe it went well. Nothing was dropped. I was a bit worn out from dashing between the four groups whom I stationed in areas that had the necessary light to shoot in. 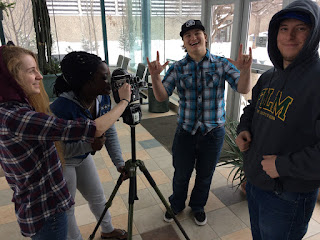 In animation class, we shot some low tech cel animation upright in the Fleischer Brothers "Slumberland" style against a rotating stage containing a physical set. Other than the animation (traced by never watched from the Richard Williams book) being crazily erratic, it worked very well. I exported the animation but did something wrong so I'll need to post this in a few days.
Posted by Gerald Saul at 8:47 AM