Since dad got out of the hospital Thursday evening, he has been doing quite well. He was in the hospital for almost 9 days, the first two being mostly non-responsive he was so sick. There were quite a few symptoms so there were quite a few tests but eventually they determined that his gall bladder was the primary culprit. With gall stones and other bile and junk plugging it up, he got really sick and it threw off blood sugar and digestion and many other things. It is temporarily fixed but will be removed in a few weeks. Other than some lack of energy, he is back to his old self. 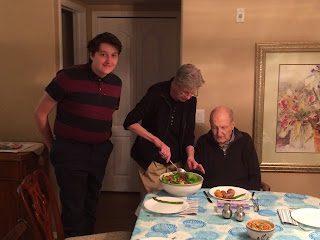