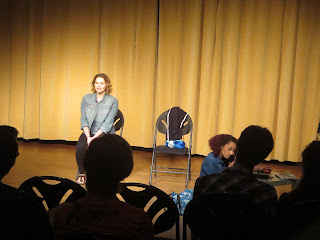 We were at the final Combat Improv of the season tonight. A few more people attending than yesterday, but they really do need to ramp up their publicity. Their acts are very strong and are always better with a crowd as they play off the energy of the people. We got to see Sierra (William's piano teacher) perform (alongside Jasmine, a film student) for the first time. The final bit was an attempt to reenact an entire movie suggested from the crowd. William called out "Hour of the Wolf" so they did that. They were good but their read of the film (which of course they've never seen) was not as strange as the original Bergman surreal/horror masterpiece.
Posted by Gerald Saul at 10:34 PM