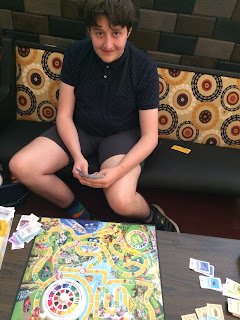 Brunched at the Underground Cafe on 20th Street before heading home. William and I played "The Game of Life", which has been changed a bit since I was a kid. It's not a great game but we had some fun. I had to use a dime in stead of a car because there was only one car and no people-pips left in the box. He chose no education or other upgrades. I was sure I would win but he did.
Posted by Gerald Saul at 10:42 PM