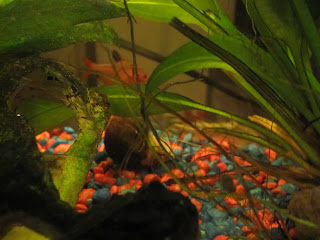 Our largest snail died. It was getting slow. Last week it floated for a few hours but then in the morning was crawling again. Finally it stopped. A day later it was still stopped. Luckily, rather than tears as with other dead pets, William opted for converting it to a decoration. Now its shell sits where it used to live, a monument of sorts. The shell is far more translucent than when it is occupied.
Posted by Gerald Saul at 9:29 PM