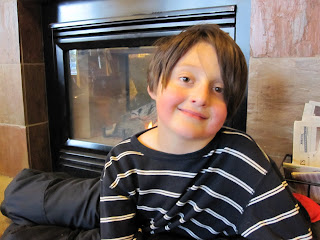 Some meetings started late, others were canceled altogether. Got to love the snow some days. After work we took William on the first tobogganing day of the year. I shot some video but somehow deleted it before downloading it from the camera. (..stupid mistakes get made, but not not usually with my archiving.) It would have been a noisy little video where William is getting into position on his belly. The camera would tilt up to see a plane flying overhead, then back down as he finally pushes off and goes to the bottom of the hill near Chapters. It was very cold and my hair was blowing in my eyes so I didn't even zoom with him. Instead, the image above is while inside Chapters with frozen cheeks drinking cocoa.
Posted by Gerald Saul at 7:05 PM