Brock Stevens at the Filmpool 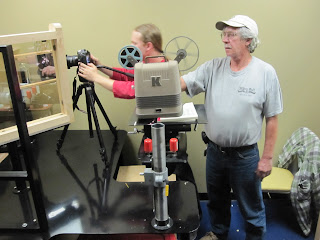 Brock Stevens was one of the original Filmpool members. It used to be amusingly annoying to have him at meetings because he would vote against every motion, regardless of all arguments, even if he completely agreed with the motion. I saw him today after the Filmpool Board meeting as he worked with Rob Hillstead to transfer old Regina films to video using the telecine that the Filmpool recently acquired from Film Rescue in Indian Head. In this picture he is running a standard 8 projector with a variable speed controller to correct the frame rate differences.
Posted by Gerald Saul at 11:22 PM

Thanks G - had been wondering what was up with him.