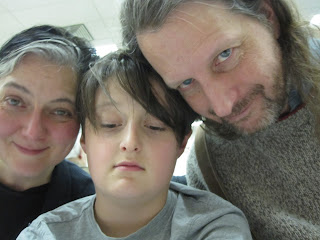 This evening we went to a church fowl supper; William apparently is uninterested in being there, or perhaps annoyed as usual by my beard..Afterwards Kevin and I went to Rise of the Planet of the Apes this evening. I found it pretty entertaining, even though I kept asking myself why there were would be a a privately run primate containment facility, filling an entire city block and with a permanent staff of three, in the middle of San Fransisco? Both visually as well as narratively, it was a chimp prison. Odd. Enjoyed it anyway. Last night however, I watched the series opener of "Grimm". which I had high hopes for. I imagine you have all heard the oft advertised premise that a descendent from the Grimm family is a cop and he can see enchanted creatures that appear to everyone else to be just normal people. Well, most of the episode was spent telling us that. The rest was a rather forgettable search for a kidnapped girl which required the Grimm character to team up with a big bad wolf. The characters were all rather forgettable. He is engaged to someone who hangs out in his kitchen in one scene. He has a partner whom he doesn't confide in and is equally forgettable. The only thing I do remember is the main message, that there is a super-cop who can tell who is guilty of a crime by looking at him and we shouldn't doubt him as he wrestles these seemingly innocent people to the ground and confines them while searching their houses. If we can learn to trust our police like that, the world will be a safer place.
Posted by Gerald Saul at 10:45 PM