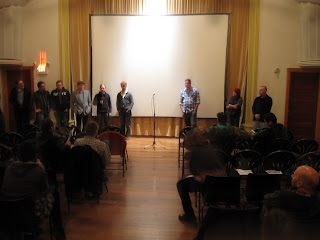 This evening was the first of two Filmpool premiere screening events, held at the Artesian. I'd seen a few of the films before but there were a number of great surprises. Jason Britski's film "Witchcraft" was excellent, featuring x-rays, very old home movies, and the sound of an optical printer. Ian Campbell presented a video called "Warm Iced Tea" which was short in a very fluid fashion, partially through a drinking glass, with every frame being a bold and dynamic compositional masterpiece.  The Art of Fire Showcase by Rob White laugh out loud funny. I had lengthy conversations with Rob Miller, Jason Shabatoski, Stephen Onda, Rob Hillstead, Janine Windolph, Chrystene Ells, and Jason Britski. I went alone, Margaret having a commitment at OSAC and this show being severely inappropriate for William who stayed home to watch the three hour Terry Pratchett film "Going Postal" for a third time this week.
Posted by Gerald Saul at 11:52 PM