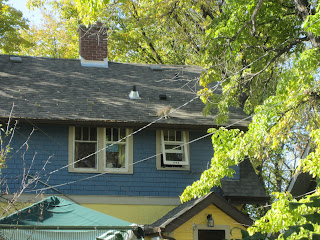 We've needed to lodge our bathroom window open for air during renovating and Sylvie thinks it is a new door, at least she thinks it is a new door out. She goes out onto the roof and jumps up to the higher level and then can't come done. The other day I decided to leave her up there, certain that she'd eventually figure out a way off. She didn't. Four hours later she was still freaked out and wandering around up there. I got out the ladder and dragged her down. Strange cat. She's not been as anxious to go out that window since then.
Posted by Gerald Saul at 9:40 PM

cats. rulers of the world with very little effort.